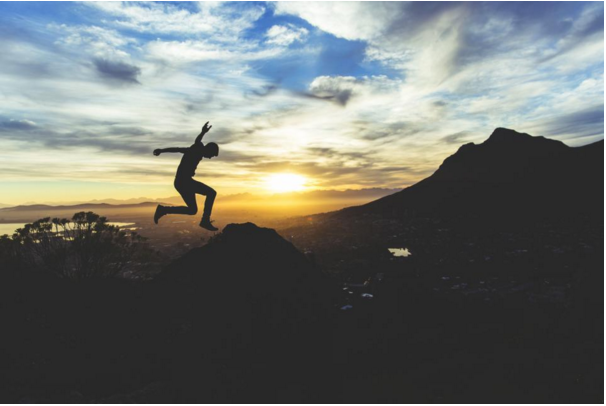 When I was a kid, there was a stone quarry where everyone would go to swim. Well, actually, it was so they could jump off of a specific cliff into the water. Yes, it was illegal to be there, but that certainly didn’t stop anyone from sneaking in.

People always talked about how awesome and scary it was to jump off of the East wall due to its height (roughly 60-70′). When I first stepped to the edge, I felt sick to my stomach as I looked down at the water. I tried to jump but I couldn’t do it. So sadly, I went home and felt ashamed because I allowed fear to win the day.

A few days later I decided to go back. When I stepped to the edge, that same feeling returned. Only this time -I paused- and I told myself, I can do this! Then I counted outloud, 1, 2, 3…and I jumped. As I’m falling toward the water I remember thinking, What have I done? I’m either going to get hurt or I’m going to die.

Then – BAM, I hit the water feet first. As I came back up to the surface I started celebrating. It wasn’t scary or difficult at all. In fact, it was awesome! So I climbed back up to the top and I jumped again. Then I jumped at least five more times. I went back to that place several times over the course of the summer and I kept jumping.

After jumping at least 25 times, I finally had a moment of clarity. People weren’t afraid of the actual wall, the height of the wall, the impact of the water, or even the thought of being caught by law enforcement.  They were afraid to jump.

Gravity knows exactly what it needs to do and it will always do its job. But in this scenario, if I didn’t jump, it wouldn’t have an opportunity to do its job. So I jumped.

Fast forward to 2017. I finished writing my second book and I was excited about the next steps. I searched for a publisher for about two weeks and I finally found one. As I stared at the “submit your manuscript” feature on their website, I suddenly felt overwhelmed with fear.

Then just like when I was younger -I paused- What are you doing? Just submit the manuscript and trust yourself! And then I jumped. Eventually, they approved my manuscript and I signed a contract with them. All because I jumped.

Here’s the challenge: when you’re scared and don’t know what to do, jump. When you see an opportunity but you’re afraid of what to do next, jump. Because if you don’t jump, just like me when I was younger, you will allow fear to win the day over and over until you’re sick and tired of standing at that edge. So please, just jump. You were made for greatness but that greatness can’t be achieved until you learn to jump.